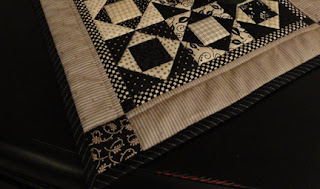 The steps shown here use bias, "single" layer prep, emphasized by the pinstripe fabric. Straight-grain strips can also be used, with the only difference being a slight lack of mold-ability. If corners are rounded, bias will work better. Double-bias binding is a favorite choice as well, and prep differences can be viewed in a separate post on this blog. 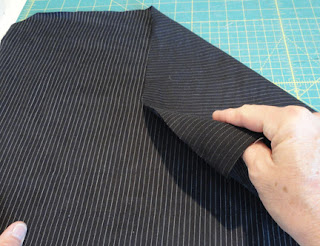 Step 1. For bias, begin by finding the bias cutting direction. The fabric is placed on a large cutting mat with lengthwise grain placed vertically, crosswise grain on the horizontal. Take an upper corner, fold it over so that the grain-cut upper edge aligns with the vertical up/down fabric grain. 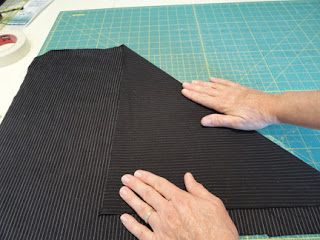 Establish that line by hand- or finger-creasing the resulting fold edge, then unfold. 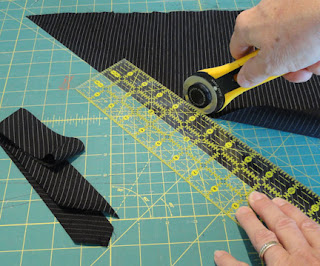 Step 3. Determine how wide you want to cut your strips. For single bias using the red Clover bias tape maker as demonstrated here, I will cut scant 1 1/2" strips. (This allows for generous 1/4" seam allowances on both edges plus the scant 3/4" center portion that will be the visible binding.)

Determine the perimeter of your quilt, add about 10 extra inches for splicing strips together, corner turns and end connection. Cut the required strips for your quilt's edge. 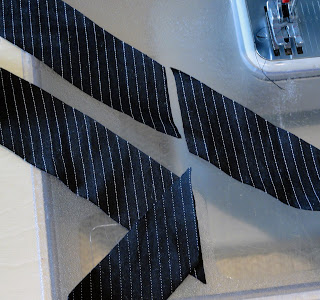 Step 4. Join the cut strips end-to-end into one length. Bias strips (cut from grain-cut straight edged yardage) will already have the "chisel" slanted ends. To understand how they fit, lay two strips with the "matched" angle ends as shown on top, with face sides UP on the work surface. Next, lift and turn over the right strip and lay short cut ends together. Adjust up or down so that the tiny angle at top and bottom where strip edges cross is 1/4" in from the cut ends. 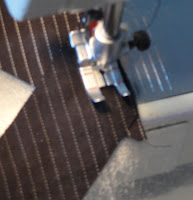 Step 5. Use regular machine stitch length to stitch across the end. If adjusted properly, stitching will intersect seam ends where the strips cross. Repeat until all strips are joined. 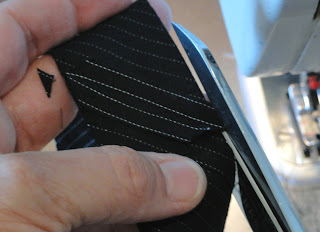 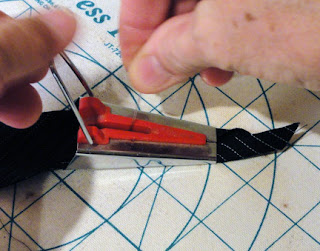 Step 7. Fold the edges in to prepare the binding. This photo shows the 3/4" (approx.) finished "flat" size that works for quilt edges that have 1/4" edge seam allowances & thin batt enclosed. When folded, the binding will be about 3/8" on the front and 3/8" on the back side.
Work on ironing surface. To use the bias tape maker, insert the point into the large end (shown here on the left end) by the handle. Use a straight pin inserted in the top slot to push the strip through until enough of the tip comes out the end so it can be finger-pulled for remaining process. 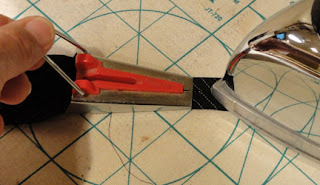 Use a medium hot iron to press the extending end so that the folds created by the 'maker are creased flat. As the iron holds the tip in place, slide the 'maker a couple of inches along, pause and press the strip to catch the iron up to the 'maker. Repeat until the entire length is pressed. 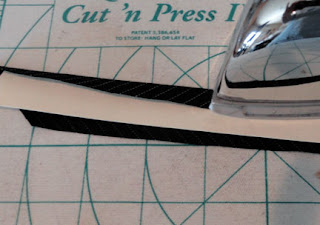 As an alternative to using a bias tape maker, cut a strip of manila or other similar weight cardstock to form the fabric strip around. Cut the strip the "finished size" center width desired. For this demo, the width of the strip would be 3/4", similar to the size this bias tape maker prepares.


Lay the strip down the center on the backside of the strip. Hold the strip in place as you use the edge of the iron to fold the strip edge over the card stock. Fold and press both fabric edges along the length of card stock strip, then move strip to the next unfolded portion.  Leave a short length of pressed fabric section folded in place strip end to help hold it in place .


To continue the binding process, click here to go to the post on this blog entitled
"Binding Tutorial: Attaching & Miter Corner Turn.